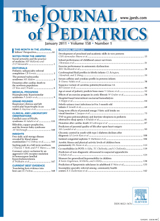 A new study by AllerGen researchers suggests that nearly 18% of children who are treated medically for an anaphylactic reaction will experience another episode of anaphylaxis within a year.

The study also found that children with food-induced anaphylaxis and children with asthma are at the greatest risk of experiencing recurrent reactions.

Published in The Journal of Pediatrics in October 2016, the study is the first to look at the risk of anaphylaxis recurrence rates prospectively, once an initial, or “index,” episode has already occurred.

Led by researchers from AllerGen’s Cross-Canada Anaphylaxis REgistry (C-CARE), the study looked at the hospitalization records of 292 children who were treated for anaphylaxis in three Montreal Emergency Departments (ED) and by emergency medical services (EMS) in the Outaouais region between 2011 and 2014.

“Food was the trigger for recurrent episode(s) of anaphylaxis in nearly 85% of the cases we looked at,” says the study’s senior author, Dr. Moshe Ben-Shoshan, a pediatric allergist at the Montreal Children’s Hospital and an assistant professor of Pediatrics at McGill University.

“Interestingly, our results indicate that tree nut was a trigger in 15.4% of recurrent reactions, while peanut accounted for only 6.2%. We believe that it’s possible there is a higher degree of awareness of peanut allergy among patients, and as such, families are more diligent in avoiding peanut once an index episode has occurred.” As identified in other studies, milk was found to be a common trigger of recurrent reactions, potentially because “milk protein can appear in many products, which may not be labelled clearly,” the authors noted.

The study also highlighted a significant underuse of epinephrine auto-injectors. “We found that 80% of children experiencing a recurrence of anaphylaxis were brought to the emergency department, but 23% were not treated with epinephrine,” comments Dr. Andrew O’Keefe, an allergist in St. John’s, Newfoundland, who was the study’s first author. “It is critical that physicians, patients, and their families remain vigilant and understand the importance of using epinephrine immediately in all cases of anaphylaxis.”

Funded by AllerGen, C-CARE was launched in 2010 and has since been collecting data from thousands of adults and children treated for anaphylactic reactions. Hospitals, ambulance paramedics, and allergy clinics in Quebec, British Columbia and Ontario contribute data to the registry, and expansion to other parts of the country is underway. It is the first registry in the world to track episodes of anaphylaxis prospectively, at the time they occur.