A study co-authored by AllerGen investigator Dr. Greg Evans, a University of Toronto professor of chemical engineering and director of the Southern Ontario Centre for Atmospheric Aerosol Research (SOCAAR), has found that passengers travelling in diesel-powered commuter GO trains risk high levels of exposure to pollutants—depending on where they sit and whether the locomotive is pushing or pulling the train. 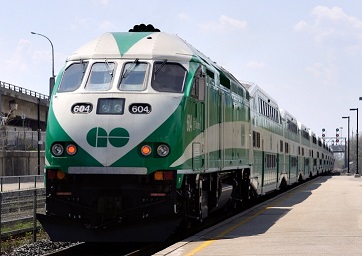 The paper, “Exposure to ultrafine particles and black carbon in diesel-powered commuter trains,” was published online in Atmospheric Environment on February 8, 2017. Its findings have been reported by CBC, the Toronto Star, CTV, CP24, Science Daily and other media outlets.

Using portable devices for measuring airborn pollutants, Dr. Evans and members of his team documented the presence of diesel-generated black carbon and ultrafine particles in the air of GO train carriages during 43 separate trips in the Greater Toronto Area.

Metrolinx, the transit authority for the Greater Toronto and Hamilton Area, has been supportive of the research and is collaborating with Dr. Evans and his team to identify solutions to the air-quality problem.

Diesel exhaust is an established carcinogen associated with negative respiratory, cardiovascular and reproductive health effects. AllerGen investigators have compiled a body of research documenting some of these effects. For example, Dr Chris Carlsten and Dr. Michael Kobor, both at The University of British Columbia, have found that diesel exposure can cause an enhanced allergic response and that it has epigenetic effects on asthmatics.