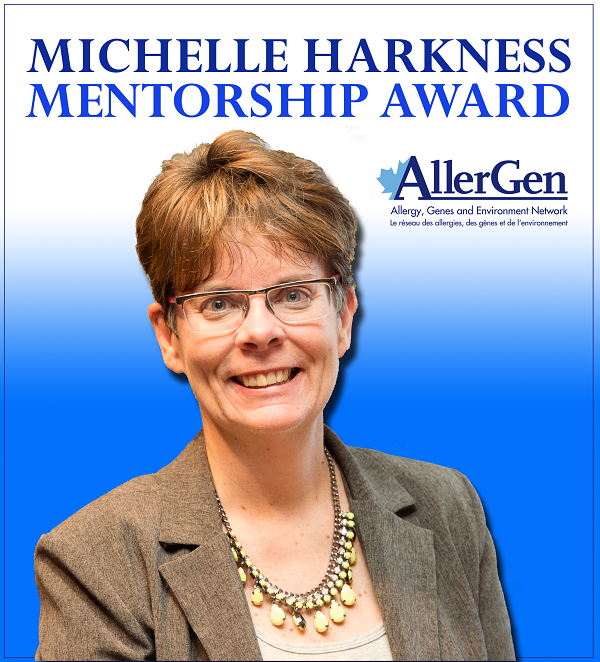 in the Fields of Airways and Allergic Disease

This award was created to honour the memory of Michelle Harkness, AllerGen’s Manager of Highly Qualified Personnel (HQP) Training and Events from 2011 to 2017. The awards recognize and support trainees, researchers and others working in airways and allergic disease who demonstrate a significant commitment to promoting capacity building, career enhancement and personal growth through mentorship.

NOTE: These awards are not restricted to members of the AllerGen Network. Any Canadian citizen or landed immigrant working in the fields of airways or allergic disease is now eligible to apply for an MHMA grant or to be nominated for an MHMA award.

NOMINATE A MENTOR FOR RECOGNITION

If you know someone working in airways and allergic disease whose commitment to mentorship has made a difference in the lives of others, celebrate that person.

Individuals can nominate mentors for recognition in one of three categories:

APPLY FOR A GRANT TO DEVELOP YOUR MENTORING SKILLS

If you aspire to become a more effective mentor, build your mentoring capacity.

Individuals working in airways and allergic disease who seek to enhance their mentoring skill-set can apply for a professional development grant of up to $2,500.

Due to COVID-19 concerns, the 2019-2020 MHMA winners will receive their awards by virtual, online ceremony at a date yet to be determined.

About the 2020 Michelle Harkness Mentorship Awards

Due to COVID-19 concerns, the 2020 Michelle Harkness Mentorship Awards will be presented by virtual, online ceremony at a date yet to be determined. Six exceptional members of the Canadian allergy and allergic disease research, education and advocacy communities will be recognized for their excellence as mentors, and one will be awarded a grant to support the further development of her mentoring skills.

The inaugural, 2019 MHMA recipients were celebrated at AllerGen’s final Research Conference in Toronto in January 2019.

The inaugural Michelle Harkness Mentorship Awards were presented on January 29, 2019, during the Gala evening of AllerGen’s ninth and final Research Conference in Toronto, ON. Eight exceptional members of the AllerGen network were recognized for their excellence as mentors, and four others were awarded grants to support the development of their mentoring skills.

Read the reAction story for details

Read the reAction story for details

Donations toward this award, for which a charitable receipt can be issued, can be made through AllerGen’s partner organization, The Sandbox Project, by:

Made out to “The Sandbox Project” and mailed to: