Marshall Beck Posted on February 19, 2019 Posted in In Memoriam 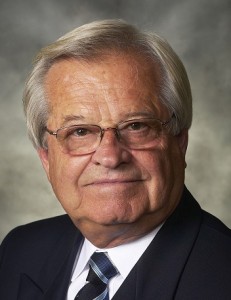 It is with deep sorrow that we announce the passing of an AllerGen supporter and friend, Mr. Donald Green, on Monday, February 18, 2019.

Mr. Green was a member of AllerGen’s Board of Directors and Chair of its Budget and Audit Committee, positions he had held since 2014.

“Though a busy and very accomplished person, he was generous with his time, and his warm, level-headed presence will be sorely missed. On behalf of the entire network, I extend my sincere condolences to his family, friends and colleagues for their loss.”

At the time of his passing, Mr. Green was also serving as President and CEO of the private investment company Greenfleet Ltd. and President and Chairman of E-celebrate Corp.

Through his career, he had held executive or governance roles in many other enterprises, including Aviva Canada Inc., AudienceView Software Corporation, Medical Diagnostic Exchange Corp., DXStorm.com Inc., the National Bank of Canada, International Bioanalogics Systems Inc., Laidlaw International Inc., the Ontario Research Foundation, McMaster University, and the Canadian Chamber of Commerce. Mr. Green began, however, in the family firm, Hamilton Clamp Company, which he transformed into the global auto parts powerhouse Tridon Ltd. Under his leadership, Tridon developed several world-firsts including the first non-metallic wiper blade and the first electronic signal flasher.

Parallel to his success in the business world, Mr. Green also excelled on the water: He sailed around the world at the age of 18 and wrote a book about the adventure. In 1978, he skippered his racing yacht “Evergreen” to victory in the Canada’s Cup and in 1979 survived the deadly Fastnet Storm that took the lives of 17 sailors off England.

In 1980, Mr. Green was awarded the Order of Canada, the highest civilian honour bestowed on Canadians. He received the Ryerson University Alumni Achievement Award in 1998, the Honorary Member OACETT “CET” designation in 1996, and the Administrative Manager of the Year Award, presented by the Institute of Certified Administrative Managers of Ontario in 1986. He was inducted into the Burlington Sport Hall of Fame in 2012, the Royal Hamilton Yacht Club Hall of Fame in 2015, and the Canadian Sailing Hall of Fame in 2018. Mr. Green held an Engineering degree from Ryerson Polytechnic University, along with Business Administration certifications from the University of Western Ontario and McMaster University.

He will be much missed by the AllerGen community.