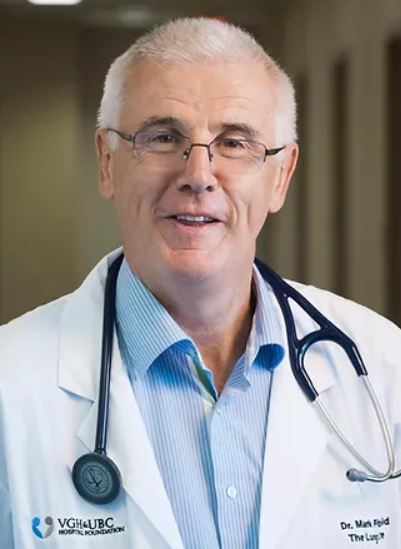 It is with deep sadness that AllerGen shares news of the death of longtime AllerGen colleague Dr. J. Mark FitzGerald, who passed away in Vancouver, BC, on January 18, 2022.

For the entirety of AllerGen’s tenure as an NCE, Dr. FitzGerald was the lead Investigator of the Clinical Investigator Collaborator (CIC)’s Vancouver Site.

“He was a brilliant clinician, scientist and strategist,” comments AllerGen President and CEO Dr. Diana Royce.

“His contributions to optimizing care of, and quality of life for, patients living with respiratory disease were legion,” she added.

Dr. FitzGerald (MB, M.Ch., BAO, MD, FRCPI, FRCPC, FACCP, FACP) graduated from medical school at the University College Dublin in 1978. After training in Internal Medicine in Ireland he worked as a general internist in Lesotho, Southern Africa for two years.

He subsequently completed post-graduate training in Respiratory Medicine and Clinical Epidemiology at McMaster University before accepting a position on Faculty at McMaster in 1987.

In 1989, Dr. FitzGerald relocated to the University of British Columbia, where he was a professor of Respiratory Medicine. At the time of his passing, he was also the Director of the Centre for Heart and Lung Health at the Vancouver Costal Health Research Institute; co -Director of the UBC Institute for Heart and Lung Health; and a respiratory physician at The Lung Centre, Vancouver General Hospital. His clinical and research interests included asthma, COPD, tuberculosis and health outcomes.

“Throughout his career, Mark made an indelible mark on the people he influenced as clinician, researcher and as a colleague and friend,” reads the Canadian Thoracic Society’s statement on Dr. FitzGerald’s death. “His fun-loving, passionate demeanor and quick Irish wit endeared him to everyone he met.”

“Indefatigable as we have known him to be, Mark’s energy will live on in the countless patients, doctors, allied staff and trainees that he touched daily over the years with his positive attitude and vision,” comment Drs Chris Carlsten and James Johnston (Heads of UBC and VGH Respiratory Medicine, respectively). “Mark’s impact is beyond words, and his memory will only be positive given his generosity of spirit, intelligence and wit.”

AllerGen extends its deepest sympathy to Dr. FitzGerald’s family, as well as his colleagues and friends in Canada and around the world.

A donation to asthma research in Dr. Fitzgerald’s memory can be made to either the Canadian Allergy, Asthma, and Immunology Foundation (CAAIF) or the Canadian Lung Association.