Marshall Beck Posted on January 10, 2023 Posted in Announcements, In Memoriam 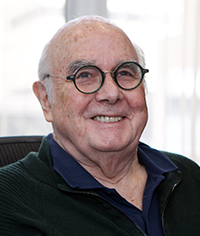 It is with profound sadness that AllerGen shares news of the passing of Dr. Richard Warrington, a leading figure in the Canadian asthma and immunology community, on December 23, 2022.

Dr. Warrington was the Section Head of Allergy and Clinical Immunology at the University of Manitoba from 1980 to 2009, during which time the Section trained over 50 subspecialty residents, with many now in senior positions nationally and around the world.

Within AllerGen, Dr. Warrington served on the Advanced Education and Training Opportunities Advisory Committee (AETOAC) from 2012 through 2019, in which capacity he informed the design of capacity-building programs to benefit the Network’s trainees and young professionals.

Dr. Warrington was awarded a Medical Research Council of Canada Scholarship twice (in 1980 and 1983), and was appointed Professor of Internal Medicine and Immunology in 1996. He served as a member of the Board of Examiners in Clinical Immunology and Allergy of the Royal College of Physicians and Surgeons of Canada (Royal College), and as Chief Examiner for six years. In 2018, he received an award commemorating 30 years of service to the Royal College.

Dr. Warrington was appointed Editor-in-Chief of the Allergy, Asthma and Clinical Immunology Journal in 2004 and remained in that position until his death. He became President of the Canadian Society of Allergy and Clinical Immunology (CSACI) in 2008 and subsequently was elected CSACI’s first Honorary Member. From 2010 to 2018, he was appointed to the Public Health Agency of Canada’s National Advisory Committee on Immunization (NACI). He also worked in the Centers for Disease Control and Prevention Committee (CDC) on a herpes zoster vaccine for two years.

“We all knew Richard as a brilliant clinician, wonderful human being, and treasured friend,” comments Dr. Susan Waserman, Director of the Clinical Immunology and Allergy Division at McMaster University and President of the Canadian Allergy, Asthma, and Immunology Foundation (CAAIF). “He will be dearly missed by his colleagues and friends both nationally and internationally.”

“We extend our sympathies to his family and colleagues and collectively mourn the loss of a leader in the field of allergy and clinical immunology, as well as a tremendous friend and supporter of AllerGen over the years.”